Post-traumatic stress is many things to many people, but it is not a motivation for murder. And now it’s time for the stigma to stop 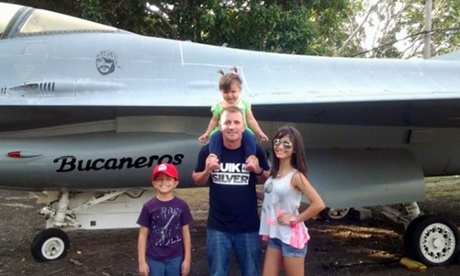 Spc Ivan Lopez was under evaluation for post-traumatic stress, which doesn’t tell us much about his mental health condition. He was an Iraq war veteran, which also isn’t a predictor of violence. (Handout Photograph)

The names of our fallen were etched onto a beautiful granite memorial, and on the morning of the dedication ceremony, I was late. I hadn’t been home for very long, after 15 months, during the deadliest period of the entire war. But I had to be at the ceremony – for Brian, Jesse and dozens of other men who remained, as names and memories. My hands vice-gripped the wheel down Interstate 5, which connects Seattle to Tacoma and then on down to Joint Base Lewis-McChord. I cursed slow drivers, banged on my roof, got pulled over for speeding.

“Sorry,” I told the officer. “Just back from Iraq, you know?”

He nodded, like I wasn’t the first or the last to offer that reason for barreling across the highway. I got the ticket anyway. That’s when I knew something wasn’t quite right with me.

Post-traumatic stress in the military reemerged, of course, after a gunman opened fire at Fort Hood Hood in Texas on Wednesday, killing three and wounding 16 before killing himself. The episode opened the wounds of the shooting there in 2009, when Nidal Hasan killed 13 people and injured more than 30. These two incidents are divergent, because no two soldiers are the same – and the behavior of two soldiers out of a million is not cause to conclude a crisis. The first Fort Hood shooting was committed by a soldier involved with extremist behavior and no mental health issues. The soldier involved in this week’s shooting was under evaluation for post-traumatic stress, which does not tell us much about his mental health condition. He was also an Iraq war veteran, which also isn’t a predictor of violence – especially when someone only served for four months and didn’t see combat.

But this intersection – “PTSD and Iraq!” – has elicited breathless commentary, of course, that combat service is a means to a dangerous end. This is the result of an erroneous American cultural assumption: weapons training plus the horrors of war equals unstable threat. This broad detachment from the military reinforces two myths – that post-traumatic stress is common in the military (the rate is only between 11-20% for Iraq and Afghanistan veterans) and that post-traumatic stress explains everything.

This is what post-traumatic stress feels like to me.

It is avoiding crowds and areas that feel constricting. It is the blood draining from your face after a loud an unexpected noise. It is the buildup of anger that no other physical job like the infantry has the power to ventilate. It’s not knowing how to tell your loved ones what’s on your mind, and the frustration you feel when they can’t read it. Post-traumatic stress is the sadness of living when the dead gave so much more than you. It’s knowing what you have lost; it’s knowing what you have gained. The truth about most forms of post-trumatic stress is that it’s not a disorder at all – it is an understanding, of the joys and sorrows of life, compressed into moments stuck in time, moments that will take decades to understand. It is awful. It is enlightening. It splinters relationships. But post-traumatic stress helps some of us find some purpose of what’s left after war.

Post-traumatic stress is many things to many people – a civilian, a soldier, a veteran – but it is clearly not a motivation for murder. If anyone is hurt by post-traumatic stress, it’s affected veterans and their families when suicide tragically becomes their last solution.

The factors that drive someone to commit murder are complex and interrelated: alcohol and drug abuse, a family history of mental illness, relationship or money problems. These are not particular to any one segment of the population. In fact, the military homicide rate is less than half the civilian rate. And according to one study, acts of premeditated aggression in the military is a predictor of an absence of post-traumatic stress.

It’s time for the stigma to stop. It not only prevents troops and veterans I know from seeking care – it creates misplaced caution and fear that impedes integration back into civilian life. Post-traumatic stress is a manageable condition and a natural response to trauma, one that can affect a soldier in war as much as a grandmother in a car crash. Normalizing the discussion with both civilians and veterans can help reframe post-traumatic stress as a challenge to overcome, not a cross to bear. We need to meet in the middle, and our military community needs to take the initiative. Good thing we know how to lead.

Not long after I attended that ceremony, I was edging along my fence with a weed whacker when I clipped a mouse hidden in the grass. The little guy was in bad shape, and I crushed him with a rock to end the suffering. I felt terrible.

I killed people in combat, but here was this dead mouse, upsetting me quite a bit. That’s when I realized the war had enhanced my compassion, not dampened it. My Army friends – now paramedics and firefighters, or deployed worldwide for humanitarian missions – understand this. It’s something we need civilians to understand better. Many of us have seen the worst of humanity – only together will we find the best of it.

Mental illness is a very painful condition which can cause serious hurt to one in their everyday life. We find many of our patients misdiagnosed and improperly treated, some suffering months or years with the wrong diagnosis and treatment. Dr Kittay is an experienced, Harvard trained Psychiatrist, known for his Diagnostic Expertise and can promise you very effective treatment options available today.

If you think that you or a family member may be suffering from a mental illness, please contact our office for an immediate Diagnostic Evaluation Appointment.